Diminishing returns aside, as I find myself in the early stages of my PhD, the tension between working, worrying about how much I am working and deciding to reinvent my  entire organisational system is.... rising.

It's easy to blame your organisational system when you are feeling stressed and unproductive - and I choose to do that. Acknowledging that you are taking the easy option is half the battle. First some
background.

Being a dry lab scientist (in training), how to effectively have a bioinformatics equivalent of the lab notebook has been something I've spent some time thinking about. A place to record experiments, ideas, outcomes and future directions, in a way that works with a general system for keeping track of day to day tasks and activities has been my goal.

For the last few months I've been using Evernote.  I've gone to and from Evernote a few times, but have again returned to it due to 3 simple uses that work for me:
- Combine paper based and computer notetaking
- Clients available for almost any platform I find myself
- Syncing is Somebody Else's Problem.

I'd tried TiddlyWiki previously, but the number of clients I could use it on, and keeping the syncing up to date proved difficult in practice. If I was on a remote server I'd open text files and add notes to them. If I was away from a computer I'd find the various apps a little fiddly to use and  kept resorting to paper, and then promising myself I'd transcribe that paper later. All this really mean was that I had another task to do before I could even get to doing my actual tasks.

Frustration with this setup coincided with two separate features I came across for Evernote: Geeknote, an open source command line tool and Evernote moleskin notebooks.

I'll write more about how Geeknote and using it from the command line in another post. Briefly though, the ability to type 'todo "Upgrade server to latest Ubuntu"' in the middle of a remote command line session on a server and be confident that it will be captured along with all your other tasks and notes has been a real benefit.

The Evernote notebook has also solved a problem I've had whenever I've been tempted to get a moleskin notebook before - they are too nice to write on! Rather than being a place for notes, they'd be book I'd carry around but hesitate to write in them for fear of marking the expensive book with something less than profound.

Evernote moleskin works around this by bundling in 3 months premium subscription to Evernote. A key feature of this is offline access to notebooks, which can be handily on things such as planes or when wireless is unreliable. I treat the moleskin Evernote notebook as paper I need to get through, rather than try to avoid spoiling. It’s been great, though I still need to get a handle on scanning in the pages on a regular basis.

However this system  hasn't been completely useful. It’s approaching a 'capture everything’ system ala GTD, but as way to plan tasks ahead, with a distinct todo list etc, it remains sub prime.

The addition of reminders to Evernote had made me think about how to use Evernote as a real GTD single collection point, but keeping track of the reminders isn't working with so many notebooks in my account, and the mix of scanned paper and computer tasks together meant that I never really had a to-do list.

That's about were I was up to from last week. Geeknote didn't support reminders, and I had one of those 'how hard can it be' moments. Fortunately, a day or two of using my limited python skills resulted in my first pull request to an open source project.

It is working. Sort of. My Geeknote extensions seemed stable, and the habit of adding notes into Evernote is almost a natural instinct. But I still don't review it; notes go to my @Inbox ( a GTD holdover) to be neglected.

But I feel that, like with so many things, you have to use what works for you. This setup is working for me better than anything else, and we can't let the perfect be the enemy of the good. So today, in an attempt to get something done, I'm making the setup a little bit neater.

After putting together all of my rough sketches of how I think I should get organised, I managed to merge all the notes and notebooks into some rough categories  as notebooks and notebook stacks for getting me through the PhD: 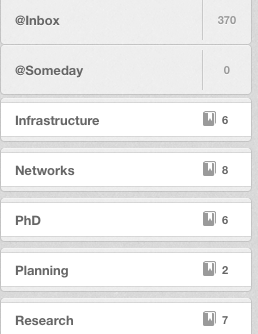 These generally reflect how I view most activities, and how I'm spending my day:

The PhD notebook stack is really concentrated on 'Getting the Dr on the door', a phrase a mentor uses and in the spirit of  the advice in 'How to Write a Better Thesis' that the thesis is an a examination; This folder is all about the experiences and deliverables required to get that PhD. The Research folder is where the content is created/modified/discarded/revisited. Keeping track of hurdles, requirements and personal goals - as well as writing (e.v.e.r.y d.a.y) -  is a distinct responsibility from doing the actual PhD research and I think it deserves it's own mindset. 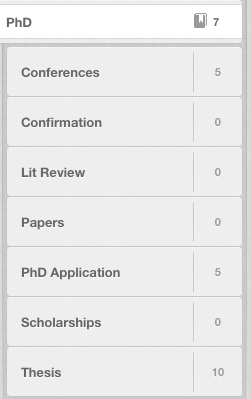 There is still a lot to be done with my organisational setup. Having defined the broad areas of how I work, I still need to go through the 370 notes in my inbox, and then actually complete some of the tasks they include. I also need to make sure that I review things regularly.

I haven't done all that much today on the system - renamed a few notebooks and moved some notes around. But I feel better about it already. Acknowledging the shortcomings has helped me see it as a work in progress, and a way to move it one stop closer to the goal of a perfect good enough system to get me through my PhD (and beyond).